Hedy Davis Interviewed on CHAIFM 101.9 (Click on the "Play" button to the left)

Below is my latest Chai FM 101.9 radio interview. Seems this is the one people love the most so press the button, sit back and relax – in the first two minutes Charisse Zeifert tells her audience about the other interviews she will air.  Her entertaining one hour program runs from 12.00 noon on a Friday.

Please note that I will be giving an illustrated talk on the story of the Shtetl by the Sea, at Jaffa, Pretoria on Wednesday 25th November 2015 at 7.30 pm. Enjoy – LOL Hedy

Wayne Turner interviews Hedy Davis and talks about her book, Muizenberg the Story of the Shtetl by the Sea. 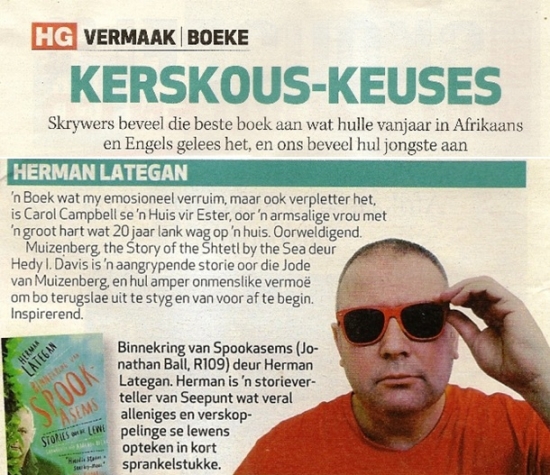 Herman Lategan,  ‘a story teller from Sea Point’ – found my book ‘Muizenberg the Story of the Shtetl by the Sea’, to be a gripping story about the Jews of Muizenberg, and their almost inhuman determination to overcome their misfortune and hardship, inspiring!(Huisgenoot p 76, 18 December 2014)

Thank you all who have written to me, be it on Facebook or through letters - So many charming comments have come my way – allow me please to share a few of them with you...

Ian Miller – Sydney Your book has been a fascinating read – so many names and connections from the past.  It’s not unusual to go out to friends and find four  or five of the couples there have some or other attachment to Muizenberg.  I guess you can take the boykie out of Muizenberg but not Muizenberg out of the boykie.

I loved the book from beginning to end – and will treasure it always. Love Heather

I have already received and read THE BOOK. I was most impressed with the content and your style. I am sure it will be used by students of social history of the Cape, and, of course, the Jewish community in Cape Town.

Just bought your book.  Great piece of work.  I will pass it on to my children and grandchildren.  You did something that has lasting value, particularly for the South African Jewish Diaspora. Lots of love Wilfred Teper –Toronto

Tribute to Jimmy Seftel  by his son Paul – London

Although my father was increasingly frail in the last few years, and his eyesight had faded, he remained mentally as sharp as ever. He was a mine of information about Muizenberg and thoroughly enjoyed Hedy Davis's recent book "The Shtetl By The Sea" which my mother read to him.

Thank you for alerting me to your interviews on Simcha. I watched with great pleasure – you are a terrific storyteller and with Muizenberg you seem to have found your mètier. I look forward to the next one. Love Marge Green – Cape Town

Your telling of the Jewish history of Muizenberg should be made available on DVD. Most interesting. Thank you for your work to preserve this history. With the closing down of many Synagogues across South Africa, as more and more Jews immigrate, our history is being lost.

What a lovely article on Muizenberg in the Jewish Life! Mazeltov!

So proud of you Hedy, you bring back memories and you ensure continuation of our wonderful happy heritage.

The book contains a comprehensive and well written chronological account of the history of Jewish Muizenberg. Reading it brought back many happy childhood memories for me. I am sure that it will do the same for other readers. 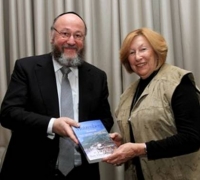 On 7 August 2014, Chief Rabbi Ephraim Mirvis gave a lecture at the Sydenham Shul Hall, and Hedy was honoured to present him with a copy of her book.

When Rabbi Errol Mirvis was newly qualified, the Muizenberg congregation engaged him to do the Services for the High Holidays of 1981 – he had recently obtained Smicha and agreed to officiate for a fee of R300 plus a return ticket to Israel and accommodation was arranged for him as well as his wife and child.  His wife told me the food at the Hotel Sharon was simply wonderful and she remembers well how they ate and ate and ate!

The Services conducted he were considered ‘very good’ and the committee noted that they would be pleased to have him again the following year.  However by then the young Rabbi had moved to Ireland and was on the path that as Rabbi Ephraim Mirvis led him to become the esteemed Chief Rabbi of the United Hebrew Congregations of the Commonwealth in 2013.  But for a few moments in time he had graced the Bimah of the Muizenberg Shul.

Hedy Davis Interviewed on 101.9 ChaiFM (Click on the "Play" button to the left)

This interview was conducted by Terry Shakinofsky  for her program on CHAIFM People of the Book, Friday mornings at11.00am.  Please note that the book, Muizenberg – the story of  - The Shtetl by the Sea is readily available at KITCHENIQUE – although the book signing referred to at the end of the recording took place  on 31 January 2014. (Permission to use this podcast was granted by ChaiFM)

The SAJAC NEWS is published for Rosh Hashana and Pesach and distributed free of charge to 2000 homes in Toronto Area and to ex-Southern Africans across Canada and the USA.  The revenue from the advertising goes to the SAJAC Bursary Fund for post-secondary education for children of ex-Southern Africans. 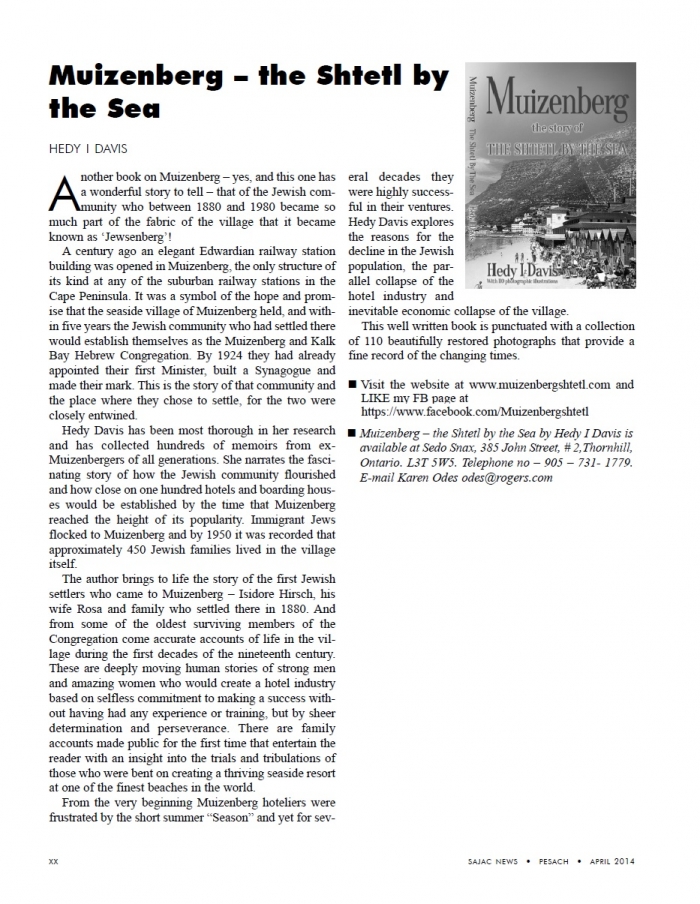 "MUIZENBERG IS FOR MANY OF US, THE CENTRE OF THE UNIVERSE."

Sir Jeremy Isaacs, Producer of the Thames Television series, The World at War

"No city, town nor village achieves fame or recognition but for the people who made it possible. Muizenberg, loved by tens of thousands and at one time the premier holiday resort in South Africa, was no exception. It was the people of Muizenberg, especially the Jewish community, who contributed to her fame. In this book, a vital part of Cape and South African history, Hedy Davis pays a lasting tribute to these folk before the mists of time will erase our memories. "

Michael Walker, historian author of over a dozen books on the False Bay Coast

The author Hedy Davis brings to life the fascinating story of the colourful Jewish community of Muizenberg. It is based on the interwoven memories of hundreds who lived there, recalling an age of golden innocence when it was safe to walk alone along the beach for miles, or sleep on a stoep on a hot summer's night Everyone knew everyone else and their business. There were no secrets in Muizenberg.

THE STORY IS FILLED WITH HEARTACHE, LAUGHTER AND SURPRISES ...

Muizenberg was more than just a village

More than just a shtetl by the sea

Memories from the Snake Pit to the Empire

Muizenberg was everything to me!

(Sung to the tune of Those Were the Days)

ourselves or the gentiles – but I certainly felt our co-religionists to be allpervasive.

Muizenberg was a Medina that was so very special to the Jewish Community of South Africa. The reason that they proclaimed Muizenberg as being their own is that they soon found out that it was the greatest bathing beach in the world. There is a Yiddisher expression for swimming in the sea there – it was a meichel.

– ALAN GADD, mayor of Johannesburg and unofficial mayor of the Zandvlei

Never mind the South Easter, it was always worth coming to Muizenberg if only for a bloz of frische luft bending against the gale, hair tied down in a floral head scarf on the old pre-war Promenade. For Jews rich and poor alike, Muizenberg was a Mecca of health and revitalization. And the food served at the hotels was the apotheosis of Jewish cooking.

Muizenberg is deserted in the winter. I walked into the local Post Office, to kill

time. And I said to the clerk behind the copper bars, “I just now had my telephone account in my hand but the South Easter blew it away. Must I still pay it?”

– GEORGETTE BENZAKEIN, author of Fugues and Stories with Bloody 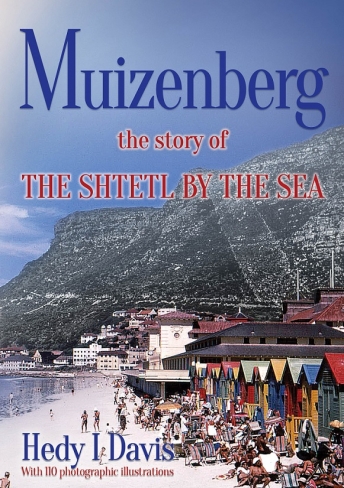